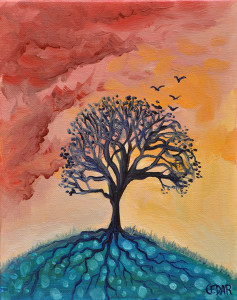 My mother has been long known as the Energizer Bunny. At 97 years old, less than 5 feet tall and 99 pounds, she is small but mighty. She has been active all her life, loves being with people and loves life itself. In the past year, however, she has had cancer, which six months of chemotherapy has put it into remission. A defective heart valve has been replaced with a new valve. But it was quite a shock to receive the notice from my older brother that my mom had fallen last Monday and broken her hip. Luckily, we were already scheduled to fly to Texas to see her on Wednesday, when we got stuck in Denver in the March 23rd snow storm. After receiving notice that the earliest flights we could catch out would be Monday, Sally and I decided to drive to Houston instead.

I had been looking forward to taking mom to Easter week services. Years of teaching Sunday School made Easter her favorite time of year. When we were young, my brothers and I would be outfitted in suits and ties that matched her Easter dress and hat, some of which were pretty wild for our old conservative Lutheran church. But this was not the year to take her.

Laying in her hospital bed with a 10-inch nail in her leg and two other screws, the pain killers and the trauma itself keep her drowsy. Instead of watching the children cover the cross at church with flowers, I read the last chapters of Matthew, Mark and a little of Luke to her while she struggled to keep her eyes open. She still “Loves to hear the story. It will be her theme in Glory, to tell the old, old story, of Jesus and his love.”

A plaque in her kitchen read “First you give them Roots, then you give the Wings”. Mom and Dad certainly gave me my roots. My Norwegian heritage, my family history going back several hundred years, and my faith—these are the roots I have tried to live up to during my life as I’ve taken wing. Maybe now it’s time to give mom her wings. This may or may not be her last Easter, either way doesn’t matter much to her, as she lives in the full and firm belief that she will live in fully resurrected life, in a house of many rooms, and close to her Lord and Savior. Her faith will make her well.

Thomas V. Edgar, P.E., Ph.D., F.ASCE, is an emeritus professor in Civil Engineering after teaching at UW for 34 years.  He received the Ellbogen Lifetime Teaching award in 2014.  He and wife Sally have two adult children, Erik and Elizabeth.